1/4 teaspoon of this, 1/3 cup of that—stifling! Chefs and confident home cooks improvise! Apply the 9 steps below to the ingredients at hand. We’ve added some specifics for a few of the world’s great stews. Try a few and play with our grains gadget to round off your meal. Unlike trying a conventional recipe, your version will be unique, so let us know how it turned out. Enjoy!

Frugal cooks value their time as the most expensive ingredient, so several steps include a “Meanwhile…”. But some stews do require advance preparation. For example, some grains need hours of cooking. Stirfrys are so quick, don’t count on the “Meanwhile…” time until you really get the hang of it. The first few tries, chop all the veggies so you can be attentive your wok. Common considerations for all stews for our basic ingredient categories follow:

What kind of pan?

What kind of oil?

Gather any or all of these while the onion is cooking:

Other spices of the indian subcontinent: cassia

Here are spices and herbs the Polish love:

The spices of the Caribbean Jerk:

Except for a stir fry, you can get these done before you can kick back:

If you click a link for one of the products I recommend, it may earn a (tiny) bit of affiliate income.  Hope you don’t mind. It keeps me cooking! 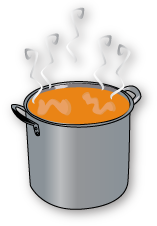